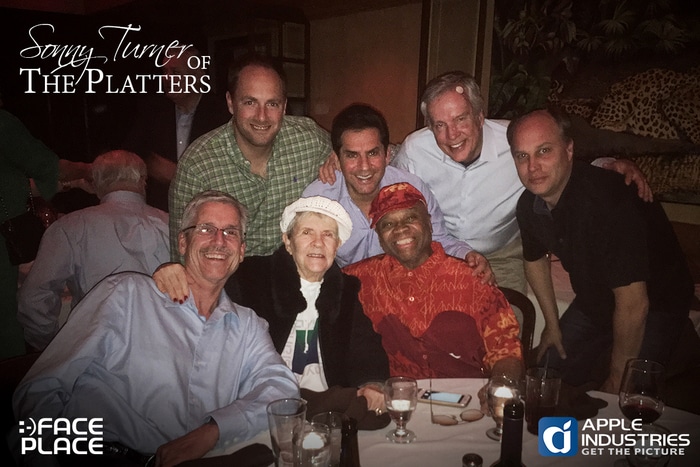 Apple Industries while establishing itself as the industry leader in photo booths has built quite the impressive network of friends through the years. With direct connections to the AMOA through CEO Allen Weisberg, to music industry connections through AMI & Touchtunes Executives and Operators. The gambit is wide and vast and Apple could not be prouder.

This ever expanding network often invites the opportunity for unexpected yet highly enjoyable encounters. This was certainly the case the last week in May when Weisberg and Apple COO Scott Avery sat down for dinner with friends at the world famous Piero’s Italian Cuisine in Vegas. Rick LaFleur, the first Vice-President of AMOA invited the group to dinner and he brought with him the incomparable Sonny Turner of The Platters fame, who is a longtime friend. The Platters had such memorable hits as “Only You (And You Alone)”, “With This Ring”, “The Great Pretender” and “I Love You 1000 Times”.

Turner’s career began as the lead singer of The Metrotones prior to him joining the Platters in 1959 after lead singer Tony Williams left the group. Turner enjoyed a prosperous career in the music industry and grants much respect to his mentor Jackie Wilson. His vocals can be heard in many movie soundtracks, most notably in films such as The Nutty Professor 2 and Hearts in Atlantis. Lots of stories and laughs were shared over delicious authentic italian meals. It was a night that will certainly be treasured by those in attendance.