Apple At IAAPA: Be the First to See Scene Machine 2; Miss America to Demonstrate How “Face Place Shares Your Face” in the Big Apple’s Most Popular Tourist Space 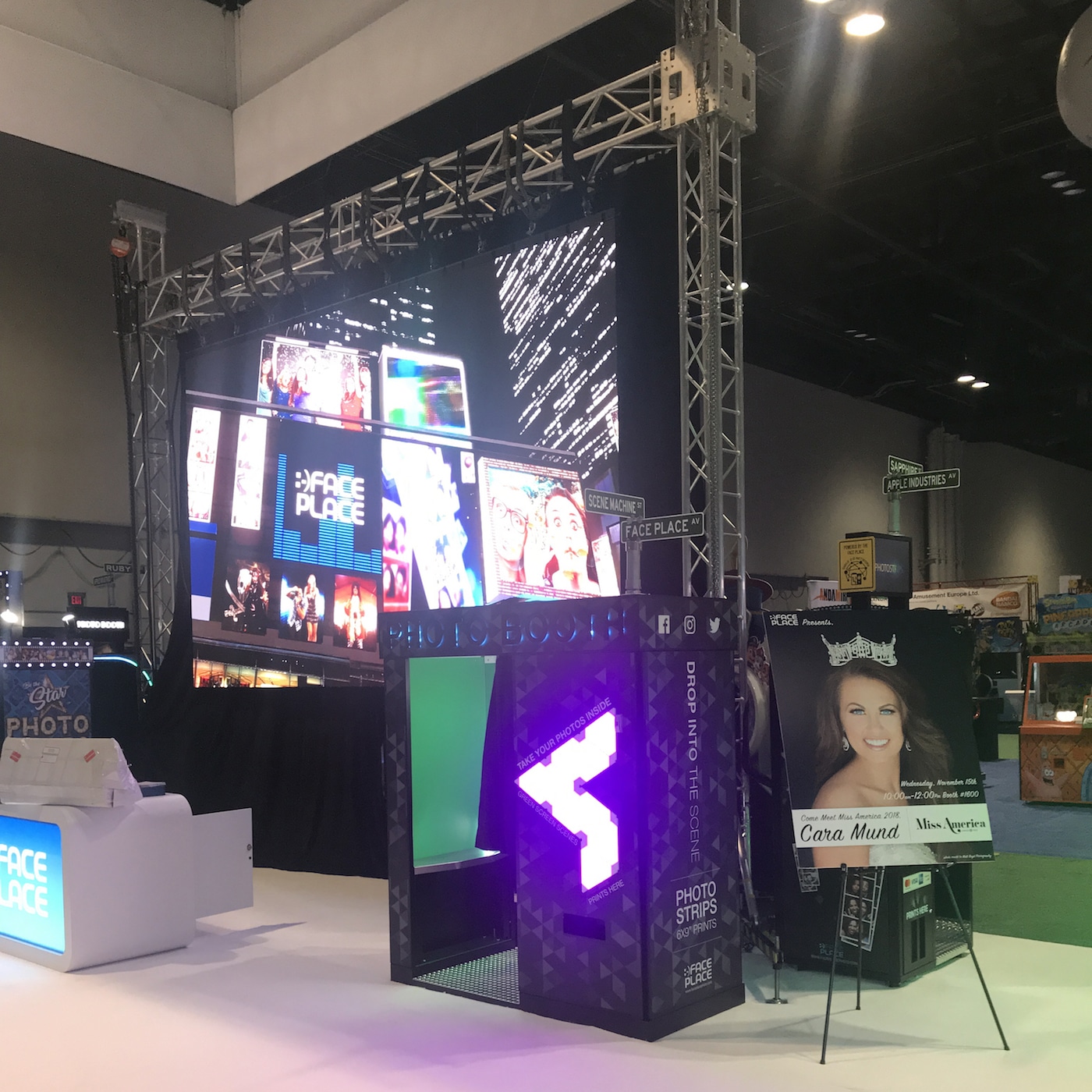 The nation’s reigning queen of beauty, brains and social activism will sign autographs and pose for pictures with Apple booth visitors.

Miss America will also help industry people experience “Share in Times Square,” an exciting media play that lets customers be world-famous for a few moments by flashing their photo on a gigantic Times Square billboard, right from the comfort of their nearest Face Place Photo Booth.

“Share in Times Square” is a free download to all operators of Smile 2.0 networked photo booths. Here’s how this exciting new feature works:

1) A customer pays the regular vend price to take their photos in any Face Place Photo Booth that is networked with the Smile 2.0 platform.

2) For a modest upcharge, the customer can briefly splash the photo of their choice on one of the huge electronic billboards in the single most-visited destination in the U.S. – Times Square in New York City. The customer also gets to write a caption that is displayed with the photo.

4) Once the photo is posted to the billboard, the customer will receive an email of their photo being seen by millions in Times Square!

“Times Square in midtown Manhattan draws 460,000 tourists and pedestrians or more each day,” said Apple Industries CEO Allen Weisberg. “Global corporations like Sony, Google, Coca-Cola and many others pay $4 million apiece a year (or even more) to advertise on a single giant electronic screen.

“But now Apple customers all over the country and anywhere in the world can be world-famous on one of those same Times Square mega-screens for a few moments at a time for an amazingly affordable cost,” said Weisberg.

“With Share in Times Square, Face Place Photo Booths have reinvented the photo booth again,” declared Apple COO Scott Avery. “We live in the Age of Sharing, where social media is king…and what people love to share the most is pictures of themselves doing fun and exciting things. Letting your friends see that you were ‘famous for a few moments’ in Times Square takes the logic of photo sharing to stratospheric heights. Like New York’s favorite song says: Start spreadin’ the news!”

Apple’s IAAPA booth is sure to be busy as trade members check out other new products including the prototype of a snazzy new edition of “Scene Machine 2” featuring zigzag graphics and a knockout LED visual treatment for the booth exterior that emphasizes its family resemblance to Apple’s larger, IAAPA award-winning “Photo Studio Deluxe.”

As such, “Scene Machine 2” is the natural platform for Apple’s “Cinema Scene” program of placing photo booths in movie theater chains, where customers can interact with a growing library of licensed Hollywood film properties and celebrity images.

The latest Hollywood studio to make a deal with Apple is Sony Pictures (www.sonypictures.com). Sony is the producer of such franchises and characters as Spider-Man, Karate Kid, Ghostbusters, Men in Black and many more.

The first Sony motion picture to get the Apple “Scene Machine” treatment will be “The Star,” (www.thestarmovie.com), a 3D animated Christmas film about the animals in the Nativity story. The movie opens in theaters nationwide on Friday, Nov. 17.

For the fifth year in a row, Apple will host a breakfast meeting at IAAPA. This year’s event, scheduled for Wednesday Nov. 15, will host hundreds of U.S. and international operators and distributors, FEC and park owners, street operators and other industry members.

Allen Weisberg will give a keynote address at the breakfast, providing attendees with an overview of Apple’s latest products and technologies. The talk will be live-streamed on Apple’s Facebook page (https://www.facebook.com/appleindustries/).