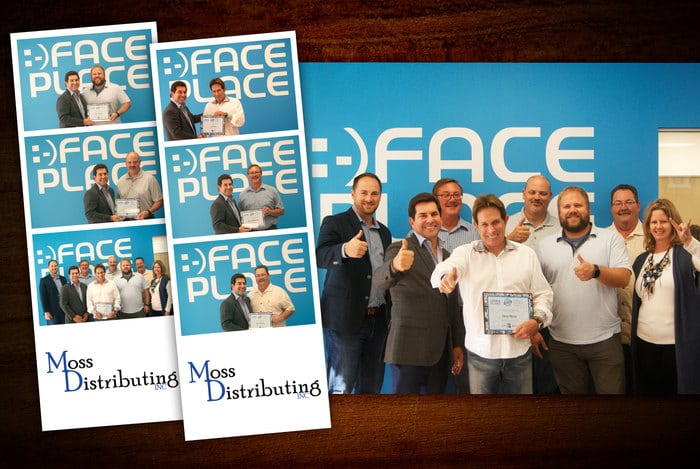 Greenvale, New York, USA – Apple Industries hosted Moss Distributing President Terry Moss and five of his top sales professionals to the manufacturer’s day-long Distributor Certification Program here on Thursday, Oct. 6th. One of the most important themes of the program was that both the earning power and the longevity of Face Place Photo Booths are comparable to the industry’s most popular digital jukeboxes.

“Industry leaders like Moss Distributing are the best possible messengers for the exciting news about Face Place Photo Booths,” explained Apple President Allen Weisberg.  “With vend prices of $5 now moving to $6 or $8 in the Midwest, Face Place booths are generating weekly earnings of $500 and up across the USA.  These steady earnings in a strong location are comparable to what a jukebox makes in a good neighborhood bar.”

“And, just like a jukebox,” Weisberg continued, “Face Place earnings remain rock-solid for years, sometimes up to a decade and beyond.  In many cases, Face Place cash boxes actually increase over the years because – again like a jukebox — our content is continually refreshed with free downloads of exciting new licenses, themes and promotions.”

“Lots of industry members are surprised to learn how many Apple photo booths from 2006 are still on location, are still supported by the company, and are still generating a respectable cash flow even today,” Weisberg said.

“When they look at the numbers, more and more operators are realizing it makes economic sense to build a substantial route of Face Place Photo Booths, in much the same way as they have built a route of jukeboxes,” said Apple COO Scott Avery.  “That can mean 20, 30, 50 or even 100 Face Place units makes sense, just like having that many jukeboxes makes sense.”

To spread the word about Face Place, and to give distributors the tools they need to help operators identify the best locations and maximize earnings, Apple launched its Distributor Certification Program in May of 2016.

Over the past six months, a series of top distributors have graduated from the one-day program, becoming instant experts on Face Place, while also becoming enthusiastic converts to the extraordinary earnings potential of Apple products.

“From now on, during face to face meetings with our operator customers,” said the Moss pro, “we know we’ll be devoting a larger amount of time to the Face Place opportunity.  And, we’ll be encouraging operators to make Face Place a bigger part of their equipment portfolio.”

Apple also gave the Moss pros a closer look at new equipment that was revealed at the recent AAMA Distributors’ Gala in Illinois, such as the upgraded Face Place Sapphire.  The new edition of Sapphire includes a video attraction monitor incorporated into the booth’s exterior.  Operators will get their first glimpse of this version of the classic machine at the upcoming IAAPA Show in Orlando.

Moss Distributing representatives also received a “sneak preview” of some of the exciting licensed content that Apple is preparing to debut as part of the Face Place Network.  With brands already under license ranging from Major League Baseball to the rock group KISS, Apple has proven repeatedly that branded content drives higher sales.

In addition to the educational program, Moss Distributing executives were hosted to a night out in Manhattan the evening before the 9-hour workshop, and an onsite barbecue in the middle of the certification program itself.

Allen Weisberg has long predicted that America’s 110,000 networked jukebox locations will eventually host an equally large network of Face Place Photo Booths.  Beyond that, he estimates, an additional 50,000 to 100,000 restaurants, bars and nightclubs are ripe for Face Place operators to conquer.

“For a growing number operators across America,” said Weisberg, “Face Place Photo Booths are playing their favorite song:  ‘We’re In The Money’!”

Moss Distributing (www.mossdist.com) is known across the Midwest for quality, service and speed to market for a wide range of coin-operated music and amusement products. Headed by Terry Moss, the distributorship is headquartered in Des Moines, IA, with offices in Kansas City, MO; St. Joseph, MI; Minneapolis, MN; and Milwaukee, WI. Its staff of nearly 50 employees includes an aggressive sales team, making Moss the region’s leading distributor for a number of top music and amusement brands.