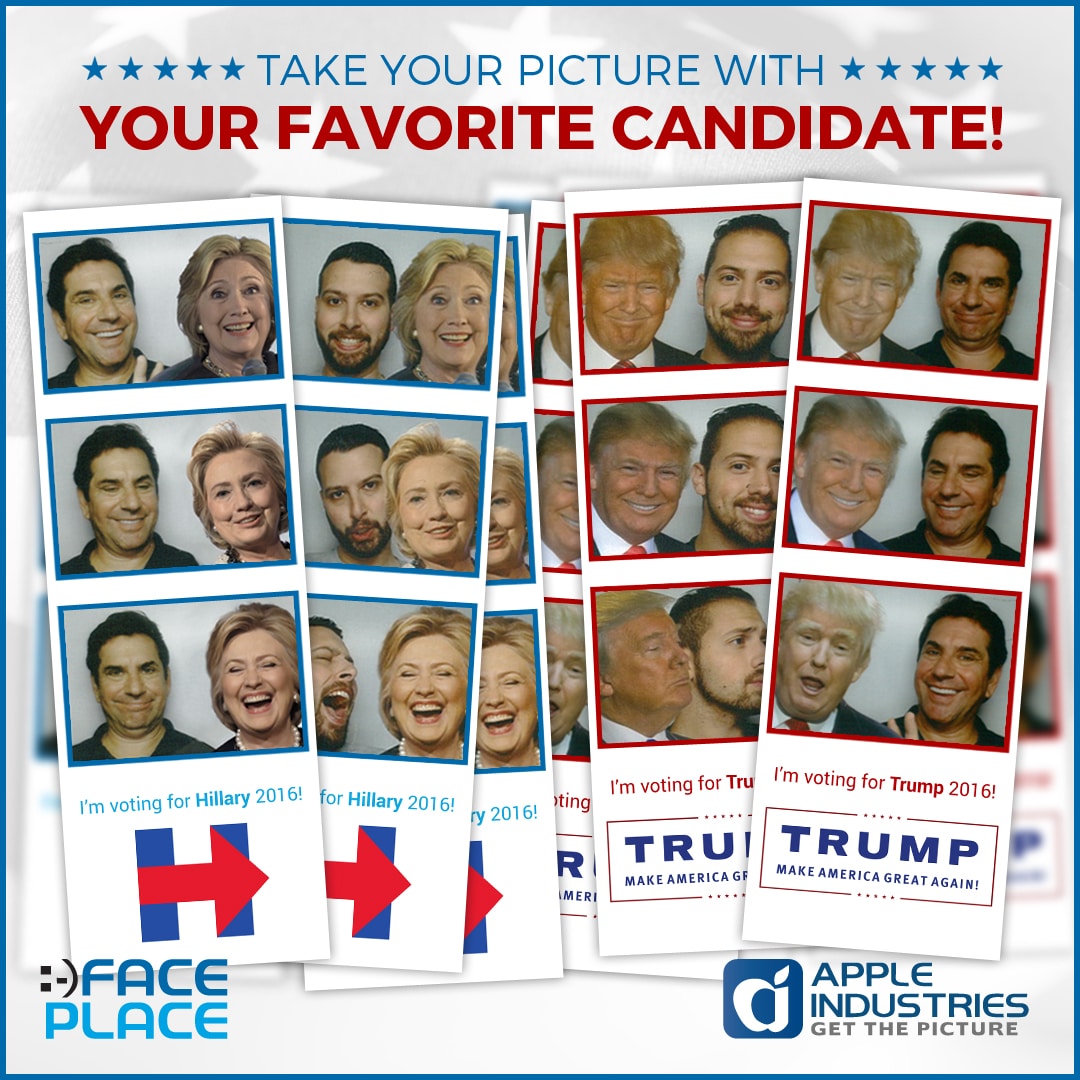 During the weekend after the second Clinton-Trump debate on Oct. 9th, Election Booth 2016 registered a massive 71% increase in sales.

Apple expects the same pattern will hold true for the third Presidential Debate. If so, Face Place operators could see Presidential Campaign photo sales explode by as much as 80% from now through the following weekend.

As of Oct. 18, the total tally of “votes” received (i.e., Presidential Campaign photos sold) so far showed Trump leading Clinton by 64.9% for the Republican and 35.1% for the Democrat.  Results are continually updated on the “Face Place Poll” report (http://faceplacephoto.com/presidential-election-booth/) as well as on the company’s Facebook and Instagram pages and its Twitter feed.

As the next and final Clinton vs. Trump Debate arrives, Apple will continue to monitor the latest results, updating the posted cumulative percentages of “votes” for each candidate as the debate occurs and through the following weekend, since public opinon often shifts dramatically in the aftermath of Presidential Debates.

Face Place Election Booth 2016 is described by Apple executives as the industry’s first and only news-driven marketing and product sales opportunity.  At no cost to the operator, Apple downloaded new graphics to all networked, Smile 2.0 Face Place booths via their advanced Smile 2.0 Network, enabling customers to show their support for the candidate of their choice by creating and purchasing a Face Place photo print or photo strip with Mr. Trump or Secretary Clinton, courtesy of a little digital magic.  The promotion has been running on thousands of Face Place Photo Booths nationwide.

Apple will continue keep its running poll going with Election Booth 2016 right up until Nov. 8, when actual ballots are cast.  Meanwhile, in a tongue-in-cheek reference to both candidates’ slogans, Apple CEO Allen Weisberg declared that Face Place and U.S. operators are definitely “stronger together,” adding:  “We are making amusements great again!”