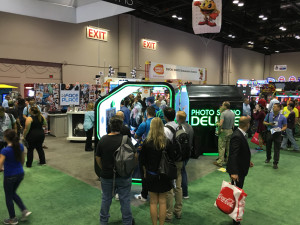 Greenvale, NY, Dec. 9, 2015 – “You know you’ve got a hit product when you get bulk preorders from distributors around the world, even before you have your first test earnings to report. That is exactly what happened with our new Face Place Photo Studio Deluxe. Without a doubt, it was the hit of this year’s IAAPA Show,” said Apple Industries CEO Allen Weisberg.

Weisberg said Photo Studio Deluxe was one of 9 products and several new features and services that were showcased in Apple’s booth at the event, which took place Nov. 16-20 in Orlando, FL.

Designed to accommodate entire groups of customers at a time, Photo Studio Deluxe stands a commanding 90 x 70 x 66 inches… roughly the footprint of a Mini Cooper automobile. But when it comes to height, the Deluxe is as tall as two Mini Coopers stacked one on top of the other.

Yet even more than its gargantuan physical dimensions, the extraordinary customer appeal and earnings power of the Photo Studio Deluxe are what establish its true stature.

“We got our first test results for the Deluxe right after we came back from IAAPA,” said Allen Weisberg. “Based on early returns, at a vend price of $5 to $10 we believe this amazing attraction will easily drive revenues of $1,000 a week in a solid FEC. In a first-class, highly trafficked venue such as a sports arena, theme park, zoo, or premier aquarium, Photo Studio Deluxe should command revenues of several thousand dollars per week.”

The huge new booth with the enormous earnings potential set the theme for Apple at this year’s Parks Show…and the theme was size.

“The Deluxe is so big that in order to make room for it and all of our other products – as well as demonstrate our new upgrades, services and features — we needed a 20-foot by 60-foot exhibit booth, our largest ever for IAAPA, said Scott Avery, Apple’s Chief Operating Officer. “We had 16 staff members trying to cover all of the space in our booth. All of them were busy every minute. Operators and distributors packed our booth from the opening minutes to the closing bell, every single day.”

Also on display at Apple’s IAAPA 2015 booth was the upgraded edition of Face Place Scene Machine, the “green screen” photo booth that “puts you in the picture,” leveraging Hollywood-type special effects technology to insert customers’ images into a 3D-like digital image, with a choice of famous real-life backgrounds and fantasy environments.

Apple bolstered the earnings power of Scene Machine by adding six new action-movie type backdrop choices for customers to choose from. The new backdrops range from a space-adventure fantasy theme to a contemporary car chase.

Scene Machine has also benefited from the addition of the new Instagram Feature, a social media option which was just downloaded to all Face Place Photo Booths at no charge to the operator. The Instagram Feature makes it easy for customers to post their photos to the popular social media site. It’s just the latest upsell option, and along with the highly popular 6×9 inch size photo print option, it’s taking Scene Machine earnings to new levels, said Apple executives.

“Scene Machine has been the number-one, top-earning photo booth in FECs and premier locations across America for more than two years now,” declared Kris Link, Apple Director of Distributor Relations. “Operators are seeing cash box earnings of $700+ per week. In fact, operators are seeing their Scene Machine photo booths earn better each year, which is unheard-of in the amusement machine industry.”

One big reason why Scene Machine has remained such a powerful earner, and even improved on its revenue capacity, said Link, is that Apple has continued to release a steady series of upgrades to its entire range of photo booths that run on the company’s Smile 2.0 operating system.

“Apple continues to invest major capital in R&D to continually enhance the value and earnings of Face Place Photo Booths with new features from licensed content, to social media sharing, to product fulfillment, to upsells, to new artwork, and more – resulting in incremental increases in the cash box year after year,” explained La Force. “Operators are learning that a photo booth isn’t just a photo booth, and not all brands are created equal. There is a difference in components, construction, quality, features, software and hardware, and above all, factory and distributor support.

“A Face Place Photo Booth is not a flash-in-in-pan, six-month money pit. It’s a long term investment that keeps paying you back year after year,” the VP concluded. “Apple has redefined our product category so we are no longer an extra or a novelty; our digital media centers are social media and product sales hubs that stand on equal footing with jukeboxes, videogames, pool tables, cranes and every other major category of equipment – and in fact, we surpass some of those categories because we can prove with earnings figures that Face Place is a superior investment.”

If that sounds like big talk, Apple executives say the industry should get used to it. In the cashbox above all, size counts!

List of Products Shown by Apple Industries at 2015 IAAPA Show: