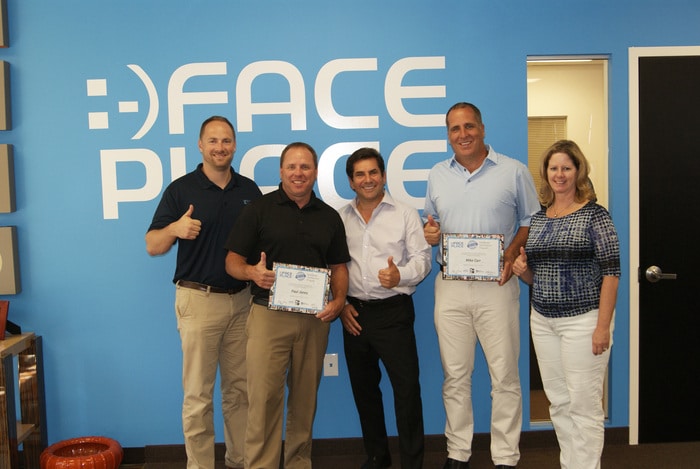 Greenvale, New York, USA – Competition is the American way, and Apple Industries has decided that distributors who have the facts about the revenues and technology of Face Place Photo Booths can make the sale, no matter what story competitors might be spinning.

To give its distributors those all-important facts, Apple is continuing to host a series of one-day Distributor Certification Programs at its headquarters here in Greater New York City.

During their July 19th event at Apple, Shaffer’s Jones and Carr feasted on an in-depth menu of Face Place facts and figures.  The “coursework” covered such topics as:

Andrew Bloomfield, went on to demonstrate how Face Place cash boxes grow stronger thanks to the clever use of custom graphics including licensed content from Major League Baseball, the rock group Kiss, and well known characters such as Michael Myers’ popular character, Austin Powers.  In confidence, the Apple team also revealed some spectacular new licensed properties that are expected to be downloaded next quarter to all networked Face Place machines.

Kris Link, Apple’s Director of Distributor Relations, explained that Apple operators are able to command $5 and $10 vend prices because Face Place units vend photos that are brighter, sharper, clearer, and have greater range and verisimilitude of colors and contrast.  The photo booth industry at its most basic level is a market where “seeing is believing” (and that means customers who happily pay more for a better product).

“The faster operators embrace this amazing opportunity, the sooner they’ll start earning hundreds of thousands of dollars per year in incremental revenues,” CEO Allen Weisberg Stated. “Apple is selling more units every year as the market realizes just how powerful the Face Place brand truly is.  And we’ve only scratched the surface!”

Shaffer Distributing Company (http://shafferdistributing.com) is a family-run organization that traces its roots back to a Columbus, Ohio amusements route in 1929.  The company expanded to distributing in the 1930s.  Today Shaffer serves amusement and vending operators with 2 branches in Ohio, plus 1 each in Missouri, Indiana, and Detroit.  For more information call the Columbus headquarters at (800) 282-0194.