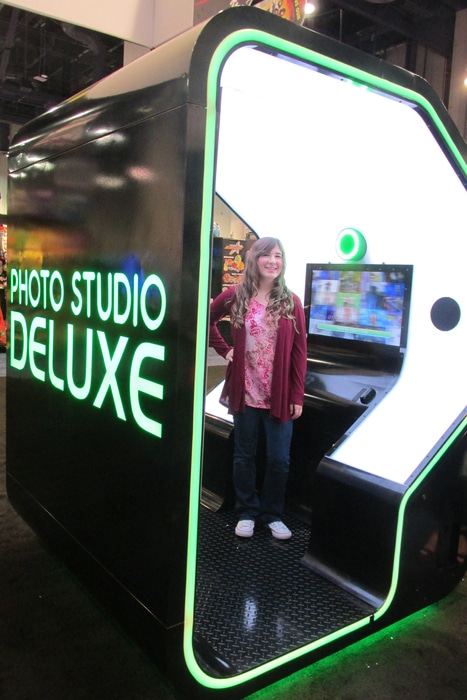 Greenvale, New York, USA – Demiya Miller, a contributing writer for Play Meter, is a high school student and the daughter of Tom and Andrea Adams-Miller, owners of Skillshot Pin-ball and Video Games in Findley, Ohio. She has had access to many of the top arcade games and machines since she was a child.

This spring Demiya and her parents attended the Amusement Expo International in Las Vegas. Here she had the opportunity to sample all of the new and upcoming arcade games and machines. Play Meter was able to get Demiya’s opinion as to what her favorite products were at this major industry event.

Demiya was attracted to the Face Place Photo Studio Deluxe by its size and colorful lighting. Her family enjoyed using the various character driven scenes. She describes, “If you are looking for some cute pictures with your friends, Face Place Photo Studio Deluxe from Apple Industries is a fantastic option.” She continued, “My family had such a fun time posing with the characters that we had to go back for more pictures.”

Demiya and her family took advantage of the newly designed scenes, in which anyone in the booth can pose with members of the legendary rock band KISS, which Apple Industries obtained exclusive licensing rights to for their exciting new KISS Photo Booth.

And The Winner of the Face Place Election Booth 2016 Photo Contest Is…
November 8, 2016