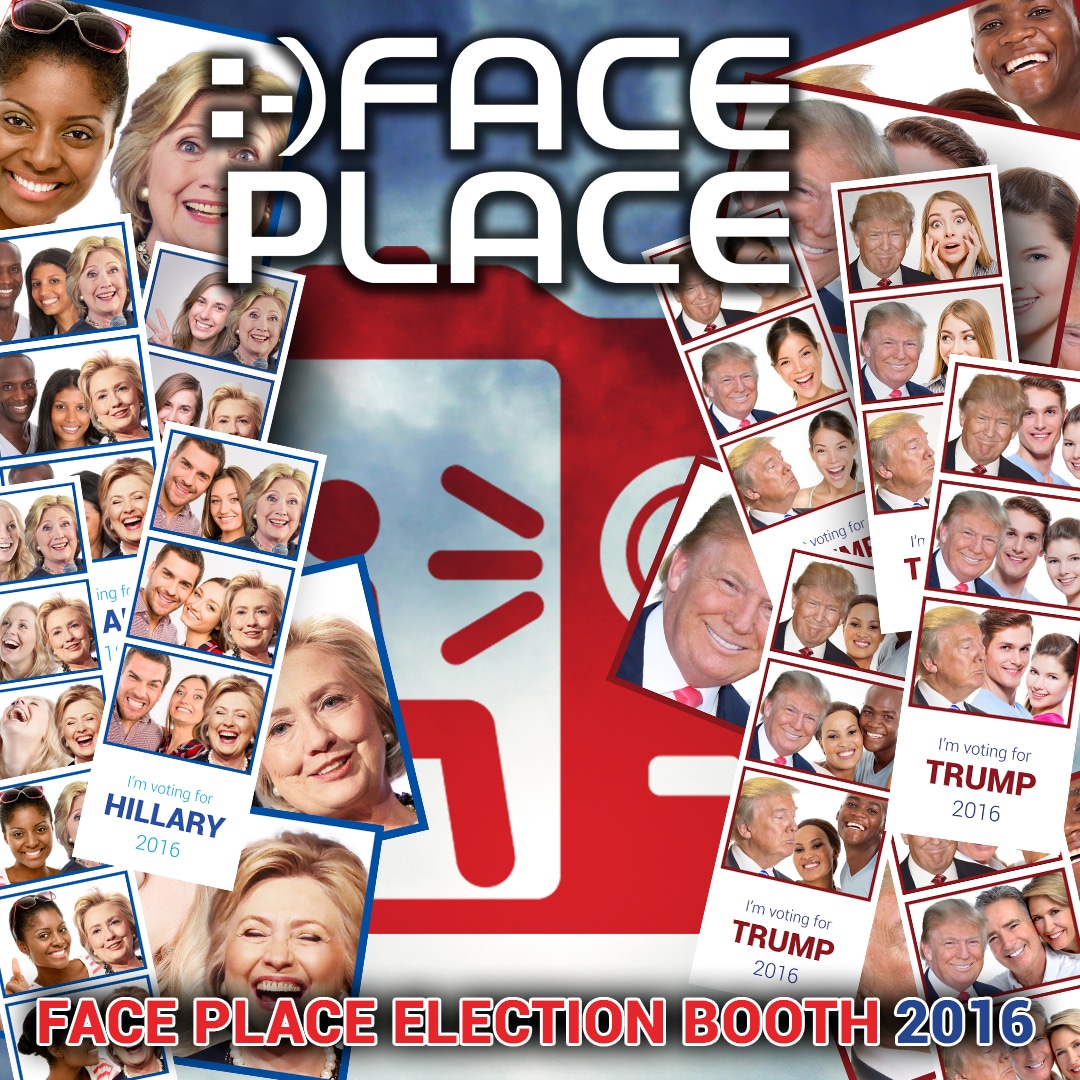 The Face Place Election Booth 2016 has come to an end. This program, referred to as “The Industry’s First Ever Event Attraction” was a success and provided Face Place with overwhelming results and a clear winner…FACE PLACE OPERATORS!

For those politically charged and devout supporters who are interested in who won the popular vote in our Face Place polls, look no further. It was a tight race, with only a 10% differential separating the two candidates. The brash Republican candidate, Donald J. Trump, garnered 55.5% of the “votes” cast by photo booth patrons from Sept. 1 through Nov. 7th in Apple’s unique promotion, Face Place Election Booth 2016.  Democratic candidate Hillary Clinton won 45.5% of campaign-themed photo sales during the same period, and saw significant spikes in support at various times during her campaign trail.

“Our favorite result from Election Booth 2016 is that 100% of our customers voted for Apple Industries,” said Apple CEO Allen Weisberg.  “The real winners, of course, were operators of Face Place Photo Booths.  They saw big earning spikes around key events such as the Presidential Debates, and steady upsells throughout the entire campaign season.”

Customers across all 50 states “voted” for Trump or Clinton during the two-month event by taking their photos with the candidate of their choice in Face Place Photo Booths, thanks to the company’s advance Smile 2.0 Network.  Each vend of a Trump or Clinton photo counted as one “vote” for that candidate.

All the participating booths run on Apple’s sophisticated Smile 2.0 operating system and are linked into a central Smile 2.0 Network.  The same network that enables operators to remotely track each machine’s earnings and status, also allowed Apple to upload the presidential photos and graphics package, and to track the ups and downs of the Trump-Clinton campaigns and photo sales across the installed base.  Like all of Apple’s seasonal promos and graphics updates, Election Booth 2016 promotion and graphics were provided free to all connected Face Place operators.

“Apple’s photo sales for Donald and Hillary closely tracked the ups and downs of their real-world events on the campaign trail,” said Allen Weisberg.  “When Trump got hit by unflattering video recordings, his poll numbers went down in the news media and his photo sales also declined.  But when he delivered a strong debate performance, his poll numbers bounced back and so did his Apple photo sales.”

“The same pattern held true for Secretary Clinton,” Weisberg continued.  “When Hillary rolled out specific programs for better education and emphasized her lifelong work on behalf of children, her poll numbers rose according to Gallup, Rasmussen and others — and so did her photo sales.  When the FBI reopened its probe into her emails, her poll numbers dropped and her Apple photo sales reflected similar trend lines.”

Apple executives describe Face Place Election Booth 2016 as the industry’s first and only news-driven marketing and product sales opportunity.  “Apple is delighted by the huge ‘turnout’ of customers who ‘voted’ in Election Booth 2016.  The point is, no matter who they supported, people participated. We urge every citizen to follow up with the same enthusiasm for the democratic process on Nov. 8th in their local polling places!”