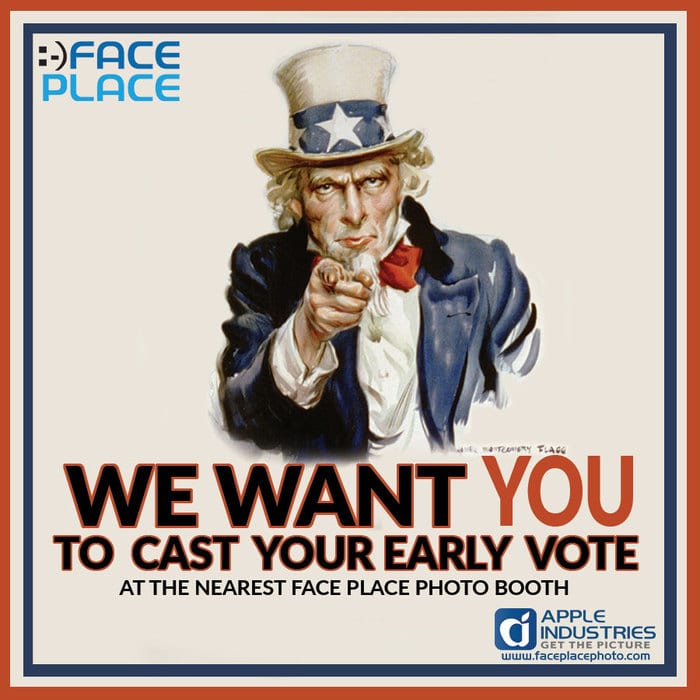 Apple Industries is on the cutting edge of the industry yet again with their latest venture into photo based amusement. Taking traditional photo booth imaging and mixing it with current events, Face Place has established itself and its photo booths within the current national lexicon.

Apple is providing staunch supporters of either candidate and those looking to have fun with the opportunity to have their picture taken with custom borders and images representative of each candidate. Now you can have your photo taken with the likeness of Democratic presidential nominee Hillary Clinton and Republican presidential nominee Donald J. Trump. Each photo taken with a candidate counts as a “vote” for that nominee. Meaning a running tally will be kept for both Clinton and Trump, and the results will be released to the public via Face Place’s social media accounts, as well as our website on a scheduled basis. So be sure to follow all of Face Place’s accounts to stay up to date with the live results of the Face Place Election Booth 2016.

Apple Industries always looks to the future, and this time they may even serve as a predictor of it. They will reveal the final tally just before the main election, serving as an indicator to the popular vote.

Just as Presidential elections prior have become part of history, so will the Face Place Election Booth 2016. Referred to as the industry’s first ever event attraction, this innovative photo contest will provide all users with the ability to insert themselves in history, both metaphorically and literally. Apple COO Scott Avery says that supporters and the public alike now have a chance to “Become a part of history with Face Place photo booths”!

Apple will be pushing the Face Place Election Booth 2016 content live on Tuesday September 20th, 2016. So don’t filibuster any longer, get to your nearest Smile 2.0 enabled Face Place Photo Booth and “cast your early vote”!