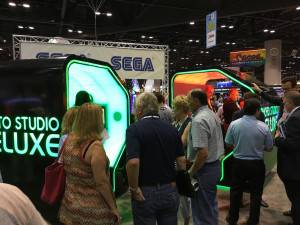 New! A GIANT Photo Booth that is an ATTRACTION with GIANT Earnings!

First, ‘Face Place Photo Studio Deluxe’ Draws a Crowd with its unique cabinet design. Then It Takes Their Picture!

Apple previewed the attraction at IAAPA 2015

Apple Industries says the time has come for operators to think BIG…and that is exactly what the innovative manufacturer is doing with its exciting new Face Place photo booth attraction.

The unit is called “Photo Studio Deluxe” and it’s designed to be an ATTRACTION that can accommodate half a dozen or more friends or family for dynamic group photos.  Patrons can cavort, celebrate and pose in almost any kind of virtual environment, thanks to Apple’s trademark “Green Screen” technology! 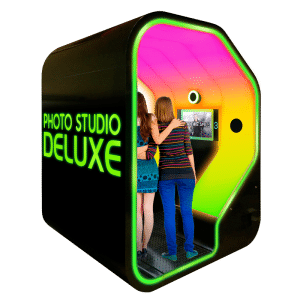 Standing a BIG 90 inches tall, 70 inches long and 66 inches wide, “Photo Studio Deluxe” is a true attraction…a “studio in a box” that can easily fit several customers inside with comfort and room to spare.  After that, users are on their own to see just how many people they want to invite to share the space inside this ultra-spacious digital photo emporium!  The cabinet is made out of steel and, like all Apple Face Place photo booths; it’s tough as a battleship.

“If you spend ten minutes around photo booths in high-traffic locations, you notice one thing right away,” said Apple President Allen Weisberg.  “Taking photos in a booth is a BIG hit with groups, and the more the merrier.  So we thought:  why not build a photo booth that was designed from the ground up to take group pictures?  ‘Photo Studio Deluxe’ is that product and we think it’s going to be a BIG hit!  Our first units have been generating strong numbers in tests at movie theaters, FECs, large game rooms and shopping malls.”

“Photo Studio Deluxe” draws a crowd in any location.  A cornucopia of 5,000 LEDs inside the booth create a vibrant light show that flashes, flickers and dazzles passers-by.  Exterior lighting on the sparkly black cabinet is also eye-catching, with a lighted logo and glowing trim on the sides and bottom of the booth.

Once inside the booth, patrons have their choice of more than 20 “photo experiences” – each a different theme, setting and characters.  Video sequences guide customers through the photo shoot.  They can go traditional …or get wild and crazy with colorful characters ranging from rock stars to rappers, pirates, mobsters and other characters. Another dozen choices round out the selections, including a “travel the world” background, a “dance off” theme and more.  Apple’s “Green Screen” technology puts customers into a multi-layered image – in their choice of color, black and white or classic sepia-toned prints. 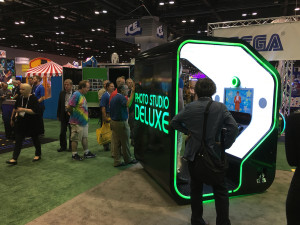 The menu gives customers a choice of four “packages” for prints: they can select one 6×9″ photo; or two 4×6” photos; or two photostrips and one 4×6” photo; or four photostrips.  The suggested vend price is from $5 to $10, paid with today’s most advanced swipe card mechanism.

“We got a fantastic response to ‘Photo Studio Deluxe’ at our IAAPA unveiling,” said Allen Weisberg.  “Apple wrote an amazingly BIG number of pre-orders.