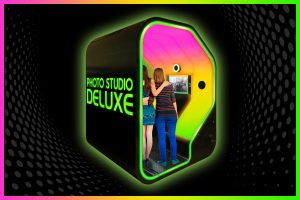 In 1925, a Russian immigrant named Anatol Josepho patented the first photo booth. For 25 cents, customers could wait 10 minutes while the machine processed and developed a strip of eight black and white pictures. Josepho sold his idea in 1928 for one million dollars, which was an enormous amount of money in the 1920s. The company who purchased his idea put a photo booth on Broadway in New York City and over 250,000 paid to use it within the first six months.

For decades after that, the photo booth soon became the dominant vending option on boardwalks, at malls, and at carnivals. But as smartphones with cameras became popular and color printing became affordable, it did not seem like there was a place for the photo booth anymore. In the mid-1990s, Allen Weisberg as the majority owner, and a former President of Atari, Gene Lipkin created a photo booth named Face Place. The concept of the Face Place photo booth was to revive the idea of a strip of black and white pictures for a small fee. Due to differences between Weisberg & Lipkin, Weisberg decided to sell his shares to Steven Hirth. Gene Lipkin remained as President of Face Place Photo. After 3 years, Face Place filed for Chapter 11.

Allen Weisberg grew up in a family that worked in the amusement vending business, and he had a successful amusement vending company of his own for many years. In 2008, Allen did the unthinkable and purchased Face Place from the New Jersey Bankruptcy Court in an age when photo booths were fading away. According to an article in Vending Times https://lnkd.in/drjipgx, Weisberg knew exactly what he was doing when he bought Face Place, and he had a vision for where photo booths could go in the future.

He integrated the Face Place name into his company, Apple Industries Inc. and started making Face Place photo booths. But the booths that Weisberg made were nothing like what people had come to expect from photo booths. These modernized booths put out color pictures, and had many photo options. After a few years, Weisberg integrated Internet and social media connections into his photo booths, and he developed software that would allow for optimal quality, instantaneous artwork updates, and other impressive features. The result was a product that service providers around the country had to have, and the business grew.

As of today, Face Place owns more than 50 percent of the photo booth business in the United States and it is all because Allen Weisberg knew who would want the new photo booths and their innovative technology. He targeted businesses that focused on selling to Millennials, because Weisberg knew that Millennials would choose a vending machine over almost any other type of vending option. If he could capture just a portion of the $1.3 trillion in buying power that Millennials possessed, then he would have a hit on his hands. From the time he rolled out his first photo booths, he and his clients knew he was right. The result is a very successful photo booth business, and a focused eye on the future.

Weisberg and his team are still looking for ways to integrate photo booths into the retail world. He has ideas that could bring together customized products and photo booths, and he is working on a variety of other ideas as well. This is all extremely impressive when you consider that Weisberg started with a 90-year-old idea, and turned it into a modern sensation. Where Face Place goes from here is anyone’s guess, but many people are putting their money on Weisberg to find success again.